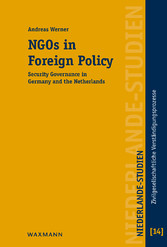 NGOs in Foreign Policy - Security Governance in Germany and the Netherlands

NGOs in Foreign Policy - Security Governance in Germany and the Netherlands

NGOs are seen as important actors of international relations and foreign policy by many scholars. However, such a perspective has rarely been empirically examined. This book therefore takes a look at the access granted to NGOs by the state to the planning and decision-making processes in foreign and security policy. By applying the theoretical concept of security governance, the author takes a look at frameworks such as the German Action Plan Civil Crisis Prevention, the Coordination Committee Humanitarian Aid, the Dutch PSD Network and the National Action Plan 1325. In conclusion, a comparison between Germany and the Netherlands reveals where NGOs can gain more access to foreign security policy. It eventually enables the author to argue how big or small the role of these non-state actors really is and what consequences this implies for both the empirical and theoretical side of foreign policy.