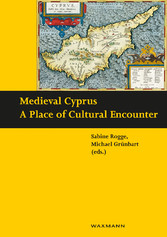 In December 2012 a group of scholars met in Münster to present their recent studies on the multifaceted history and culture of medieval Cyprus - and most of the papers presented at that conference are published in this volume. Several deal with the (political) history of the island: the reign of Isaakios Komnenos, the effects of the crusade of King Peter I in 1365, the so-called Ottoman-Venetian war. An overview of the three volumes of the Bullarium Cyprium is given. Aspects of economic life in medieval Cyprus are treated in three papers: organisation, management and economic activities of monastic estates in the Middle Byzantine period, medieval cane sugar production on the island, the commerce between the islands of Cyprus, Majorca and Sardinia. Papers on a major ecclesiastical complex dating from the early 7th century, on Cypriot artefacts of the 13th and 14th centuries used in daily life, on luxury metal objects from the Lusignan period, and on some rather disparate elements of 15th-century architecture in Cyprus give insights into the material culture of medieval Cyprus. Furthermore the topics of settlement patterns and insularity are treated in a paper on the successive relocations of the capital of the island of Cyprus from Late Antiquity to the Middle Ages.
The book contains papers by Alexander Beihammer, Nicholas Coureas, Peter Edbury, Michael Grünbart, Michalis Olympios, Tassos Papacostas, Maria Parani, K. Scott Parker, Eleni Procopiou, Ulrike Ritzerfeld, Christopher Schabel, Marina Solomidou-Ieronymidou, Myrto Veiko and Joanita Vroom.