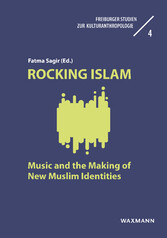 Rocking Islam - Music and the Making of New Muslim Identities

Rocking Islam - Music and the Making of New Muslim Identities

Music has the universal power to move individuals, peoples and societies. Music is one of the most important signifiers of cultural change. It is also most significant for youth movements and youth cultures. While Islam has a historically and traditionally rich culture of music, religious controversy on the topic of music is still ongoing. However, young Muslims in today's globalised world seek pop cultural tools such as music, and particularly hip hop music, as way of exploring and expressing their manifold identities, whilst challenging Islamophobia, stigma and racism on the one hand and traditional and religious challenges on the other hand.
In this volume, following an international conference with the same title, scholars and young academics from a variety of disciplines seek to explore and highlight the phenomena surrounding the two, somewhat artificially separated, realms of music and religion. The contributions not only look into different genres of music, from Tunisian metal over German female hip hop to Egyptian folk, but take the reader on a journey from continent to countries to cities and rural areas and thus give space and time to a widely neglected area of research: that of Muslim popular culture and young Muslims.