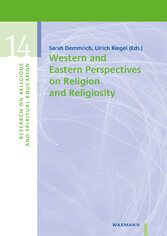 Western and Eastern Perspectives on Religion and Religiosity

Western and Eastern Perspectives on Religion and Religiosity

The concept of religiosity is a highly individual aspect of religion. The understanding of it was shaped in Protestant circles in the Western context and it has inspired a huge body of research and further developments in theology, as well as in religious education. However, both charismatic movements within Christianity and orthopractic religious traditions such as Islam raise the question of whether an individualized account of religiosity is able to grasp the spectrum of lived religion comprehensively. Furthermore, with increasing globalization, even Asian worldviews like Hinduism or Buddhism are part of daily experience and have expanded the notion of what can be perceived of as religion. These changes were discussed at the international conference 'Religiosity in East and West: Conceptual and Methodological Challenges' at the University of Münster, Germany, from 25 to 27 June 2019. With this volume of conference proceedings we pay special attention to the most significant conference contributions relevant to religious education and practical theology.