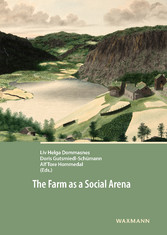 The Farm as a Social Arena

The Farm as a Social Arena


'The Farm as a Social Arena' focusses on the social life of farms from prehistory until c. 1700 AD, based mainly, but not exclusively, on archaeological sources. All over Europe people have lived on farms, at least from the Bronze Age onwards. The papers presented here discuss farms in Norway, Sweden, Iceland and Germany. Whether isolated or in hamlets or villages, farms have been important elements of the social structure for thousands of years. Farms were workplace and home for their inhabitants, women, men and children, and perhaps extended families - frequently sharing their space with domestic animals. Sometimes important events such as feasts, religious services and funerals also took place here. The household thus became a multi-faceted arena, which brought together a variety of community members that both shaped - and were shaped by - its social dynamics. At times work and other activities defined by the social arena that was the farm even affected long-term developments of society as such.
With contributions by: Birgitta Berglund, Timo Bremer, Timothy Carlisle, Liv Helga Dommasnes, Doris Gutsmiedl-Schümann, Alf Tore Hommedal, Karen Milek, Emma Nordström, Kristin Armstrong Oma, Helge Sørheim and Inger Storli.