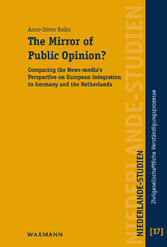 
Central to the study is the relevance of media actors as actors in civil society for the European integration process. This relevance is empirically assessed, making use of a selection of print media from two founding members of the European Union, Germany and the Netherlands, analysing the path-dependency of journalistic coverage and reporting along two questions:
Is the focus on and evaluation of the 'European Project' and its different aspects in Germany and the Netherlands alike, or does it differ?
How do traditional political and societal perspectives affect opinion formation in the media?
The country comparison draws on the neo-institutional school of thought. The large corpus of newspaper content (articles and commentary) has been assessed quantitatively as well as qualitatively searching for major issues, motives, and discourses in temporal perspective. The last major treaties of the European integration process, the so called Constitutional Treaty and Reform Treaty, serve as temporal starting and endpoint for analysis.


Anne-Dörte Balks, M.A./M.Sc., studied European Studies (focus: political science) at the University of Osnabrück, Westfälische Wilhelms-Universität Münster, and the University of Twente (Enschede, NL). Her research interest is on the discourse on European integration in European societies and media. She currently works as Personal Assistant to the Vice President International at Freie Universität Berlin.