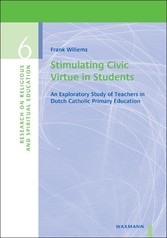 During the last two decades interest in children's development of good citizenship has grown among political and educational theorists in the Western world, leading to much debate about the concept of citizenship education. In this study, a specific approach to citizenship education is proposed, namely a virtue-ethical approach, which explicitly links citizenship education to moral education. From the virtue-ethical point of view, citizenship education is aimed at developing the civic virtues (attitudes that enable citizens to contribute to society), such as justice, tolerance and solidarity. Since this study focuses on teachers in Catholic education, these three virtues have been interpreted from a community-centred, active perspective, which is supposed to fit the normative framework of Catholic schools. The central question of this study is to what extent teachers in Dutch Catholic primary education possess the qualities that are needed to stimulate students' civic virtues, and in what way these qualities can be improved. Two kinds of moral pedagogical teacher behaviour are central: the teachers' modelling behaviour and the way teachers arrange their moral classroom discussions. These two kinds of behaviour will be studied as well as their relationship with the teachers' moral beliefs. Furthermore, a teacher course that is designed to stimulate these two kinds of moral pedagogical behaviour is evaluated.

Frank Willems (1979, Boxmeer) lived in Vierlingsbeek, a small town in the south eastern part of the Netherlands, the first twenty-two years of his life. After finishing Teacher Training College in 2002, he moved to Nijmegen to study educational sciences at the Radboud University. The next year, he also started studying philosophy of education at the same university. In 2007 he finished both studies. Since that time, he had been working as a junior researcher at the IKO (Institute for Catholic Education), which is connected to the Radboud University. He was involved in research and he developed tools for schools for the implementation of the insights of his study. Currently, Frank is working as a product coordinator at Examenadviesburo, a small company in Nieuwegein (near Utrecht). He is involved in the development of exams for all kinds of professions (brokers, insurers, accountants, and others).