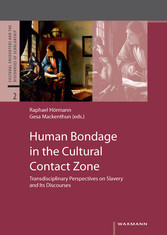 Human Bondage in the Cultural Contact Zone. Transdisciplinary Perspectives on Slavery and Its Discourses

Human Bondage in the Cultural Contact Zone. Transdisciplinary Perspectives on Slavery and Its Discourses

Slavery – the subjection of some human beings to a state of bondage by other, more powerful, people – has been an accepted social institution since ancient times. It is less well known that slavery has also produced cultural contact zones in forcing members of different cultures into sharing the same places – whether in private households, on plantations, in mines and quarries, or indeed the same imaginative sites in works of art and public memory. The recent commemorations of the abolition of the transatlantic slave trade by Britain (1807) and the United States (1808), as well as the rise of Black Atlantic Studies as a new academic field, have drawn new attention to this topic. In spite of these recent trends and the prominent position of slavery studies in British and American historiography, slavery’s implications for the study of cultural encounters remain a scholarly desideratum. This volume seeks to contribute to a better understanding of different forms of human bondage in cultural contact zones.

The essays in this collection represent a wide spectrum of the scholarship on slavery, as well as illustrating the vast range of conceptual approaches to the topic. They bring together research from several different disciplines and critical angles addressing, for example, archaeological reconstructions of labor camps in ancient Palestine, the moral significance of early Christian slavery, the ambivalent aestheticization of black bodies within the colonial culture of taste, Enlightenment discourses about black revolution, the significance of mythical narratives in African-American slave culture, the musical mourning for lynching victims, and the blindness toward the presence of slave laborers in Nazi Germany.
Most essays collected here are concerned with the cultural and human aspects of slavery as well as with establishing an understanding for the stark differences between various forms of slavery throughout history, stretching from antiquity into the twentieth century.