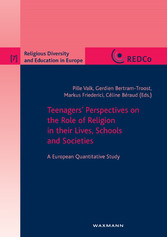 Religion is on the European agenda again. The secularisation paradigm has lost its explanatory power and the newly coined term ‘post-secularism’ is used to describe the realisation that in the current social transformation, religion cannot be ignored any longer.

The quantitative study presented in this book is part of the research effort by the REDCo project. REDCo is the abbreviation for “Religion in Education. A contribution to Dialogue or a Factor of Conflict in Transforming Societies of European Countries”. The project brought together nine research teams from eight European countries: England, Estonia, France, Germany, The Netherlands, Norway, Russia and Spain. The research involved interdisciplinary cooperation between specialists in the different academic fields of education, religious education, sociology, political science, anthropology, psychology, theology and religious studies.

The book offers valuable interpretations and inspirations on the question how the students in the 14 – 16 year age group in Europe see the (ir)relevance of religions for dialogue and conflict in their daily lives, in the school environment, and in society as a whole.

The young respondents of the quantitative study are clearly aware that the diversity of religious and non-religious worldviews is the reality of the European contexts they have to manage within. Most of them are convinced that religion must be addressed in schools, as it is too important as factor in social life, and for the coexistence of people from different cultural and religious backgrounds throughout Europe, to be ignored.