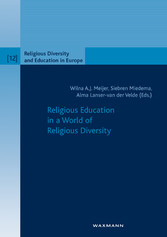 Religious Education in a World of Religious Diversity

Religious Education in a World of Religious Diversity

This volume brings together a selection of papers presented at the Fifteenth Session of the International Seminar on Religious Education and Values (ISREV), which took place in 2006 in Driebergen, the Netherlands, addressing the theme ‘Religious Education in a World of Religious Diversity’.
The authors were invited to combine the concept of diversity with the dimensions of temporality, of time and history in reworking their contributions for this book. This temporal aspect is in a sense inherent in educational thinking. On the one hand education as intergenerational transmission has a conservative aspect: tradition being what is actually and presently transmitted from the past and/or what is considered worthwhile to be passed on. On the other hand, acknowledging the activity of students themselves as a prerequisite for any education to happen, brings the open-endedness and therefore the future into the pedagogical arena in terms of development, learning, reflection, edification, et cetera.
So, the question answered in this volume is what does this inherent historicity mean for religious education as well as for (the concept) religion and religious diversity? In answering this question the contributions represent the global character of the concern with religious diversity in relation to religious education, and originate respectively from the following countries: Canada (Bhikkhu, English), United States (Moran), Latvia (Ilishko), Russia (Kozyrev), Germany (Pirner), South Africa (Roux, du Preez, Ferguson), Japan (Omori), Australia (de Souza), Turkey (Selçuk), and the Netherlands (Meijer, Miedema).