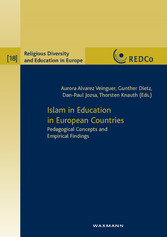 Relations between Muslims and the public education systems of Europe are often characterised by tensions. There is often still a perceived incompatibility between the claims of individual Muslims or Muslim communities on the one hand and the aims of public education in Europe on the other. The relatively recent presence of Islam in much of Europe, the internal diversity of Muslim communities, the lack of a centralized, hierarchical church-like structure – different arguments are used to justify such a discriminatory treatment of one of the largest faith communities in Europe.

Nevertheless, as this book aims to illustrate, there are already rich and diverse experiences throughout Europe of how to integrate Islam into the national and regional school systems, particularly in primary, but also in secondary education. Accordingly, this book provides some analyses of the ways in which Islam is integrated in education in certain regions of Spain, the Netherlands, France and England. These analyses are paralleled by empirical findings concerning the role of religion in the life of young Muslims, their views concerning religion in school, and the impact of religion in education and society in Spain, the Netherlands, Norway, Germany, France and England.