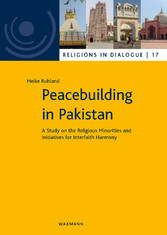 When Pakistan was carved out of India in 1947 as a homeland for the Muslims of the subcontinent, it was envisioned as a secular state where non-Muslims would be granted freedom of religion and equal citizenship. However, the subsequent historical events led to a fast Islamization of nearly every part of public life and discrimination against the country's religious minorities, who today make up less than 4 per cent of the overall population.
Based on extensive field work involving more than 100 non-structured qualitative interviews, this study explores the situation of the religious minorities and the dynamics of interfaith peacebuilding in the Islamic Republic of Pakistan. Primary focus was laid on the practice of interfaith dialogue, which - given the draconic blasphemy laws - differs from interfaith dialogue as conceived of in the West. Additionally, other peacebuilding measures, as offered by various non-governmental organizations, were taken into account, be they advocacy, promotion of human rights and unbiased education, or policy negotiation with the government.

Heike Ruhland holds two master's degrees, one in Islamic Studies (University of Zurich) and one in International Information Management (University of Hildesheim). She attained her PhD from the Academy of World Religions, University of Hamburg.