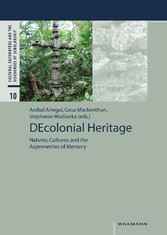 DEcolonial Heritage - Natures, Cultures, and the Asymmetries of Memory

DEcolonial Heritage - Natures, Cultures, and the Asymmetries of Memory


The volume attempts to triangulate three vibrant discourses of our times: It combines postcolonial and decolonial readings of cultural conflicts with assessments of ecological dimensions of those conflicts, as well as their significance within discourses on natural and cultural world heritage. The examples from four continents range from the medieval Middle East - already shaken by a convergence of ecological and social disaster - to modern imaginary constructions of medieval Vikings, the persistence of Indigenous knowledge in the Arctic, literary poetics of patrimony, and the heritage politics of Mediterranean urban architecture. Authors ask which strategies societies in developing countries use to defend their cultural and ecological uniqueness and integrity while being penetrated by environmental hazards and hegemonizing 'Western' forms of heritage culture; or how western societies construct their own past in ways that are sometimes reminiscent of traditional imaginations of a pre-modern past, petrified eternally in an 'ideal' moment of time. Colonial and historical forms of 'heritagization' of human and non-human environments, the essays show, answer to pressing emotional needs for a sense of stability. But the desire for nostalgia, frequently commodified, tends to collide with the similarly pressing need for political and economic survival in a rapidly changing world and in the face of accelerating extraction practices. Without being able to solve this dilemma, the volume makes an interdisciplinary contribution to taking intellectual stake of the asymmetrical politics and poetics of heritage and collective cultural memory.