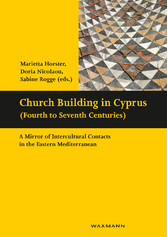 
Some hundred early Christian churches are attested on Cyprus, dating from the fourth to seventh centuries.Their architectural remains have shaped the Cypriot landscape.The peculiar evolution of the features of the Cypriot church gave rise to a scientific discussion on how to evaluate these specific local developments. In the last decade, individual research as well as conferences and workshops dedicated to late antiquity and the early Byzantine period have contributed towards a new approach and a new impulse for the study of this period in Cyprus.The volume reinforces and furthers this trend taking into consideration relevant parameters reflected on the architectural planning, such as structural knowledge and innovations, cultic behaviours, liturgical traditions, economic capacities, social and political aspirations.
Based on current developments in research, new findings in Cyprus and the focus on intercultural contacts, the volume is organised into four different sections: 1) Building the Christian cityscape and landscape; 2) Christian communities and church building, fourth to seventh centuries; 3) Interior arrangement and theological concepts; 4) 'International Byzantine Style'? Local traditions and adaptations in- and outside Cyprus.