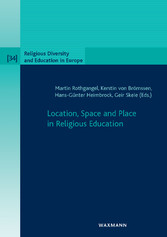 
People form attachments to their home, their neighbourhood and environment, to the region and nation to which they belong. They express feelings about space and place, especially so in 'globalized times'. In religious studies, in theology, and in education, there is a growing interest in spatial theories either as constructed within national borders, or within international and transnational spaces. The 'spatial turn' has become an acknowledged term in interdisciplinary discourses.
Although every practice of religious education is situated and contextually dependent, religious education (RE) research until now has not systematically paid attention to this fundamental insight. This volume is devoted specifically to clarifying the close relationship between RE practice and spatial and situational conditions.
After clarifying the main concepts in Part 1, Part 2 includes chapters related to classroom studies, while Part 3 focuses on studies about teachers of religious education. Part 4 contains studies beyond the classroom, such as school chapels, churches, and 'inner space'.
All contributions to this volume were developed in the context of the European Network for Religious Education through Contextual Approaches (ENRECA) which has focused recently on the central issue of space and place.