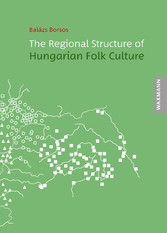 'This book is about one of the most important questions under investigation both in Hungary and throughout Europe, namely, how and under what effects is traditional popular culture territorially distributed. This work uses new methods and new sources; it is based on the digital elaboration of the biggest and most comprehensive data set of Hungarian ethnological research, the 634 maps of the Atlas of Hungarian Folk Culture. Borsos's interdisciplinary elaboration creates a synthesis in ethnocartography with the help of mathematical, statistical methods and computerised cluster analysis, and thus assures an important leap in the science of ethnography.'
Committee of Ethnology, Hungarian Academy of Sciences
'This work is a compendium, in the classical sense of the word, justifying, clarifying or eventually refuting our former knowledge obtained on the extremely rich distribution pattern of land and culture which characterises the Hungarian people. A comprehensive outlook, giving help to find our way in the complicated spatial labyrinth of cultural organisation.'
Balázs Balogh, Director, HAS RCH Institute of Ethnology


Balázs Borsos, Prof., DSc. of ethnography, has been working at the Institute of Ethnology of the Hungarian Academy of Sciences for nearly 30 years, since 2010 as scientific councilor (full professor). He was deputy director of the institute between 2002 and 2012. His main research interests lie in visual and ecological anthropology, ethnocartography, African ethnology.