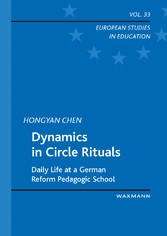 
This study focuses on the issues of secrecy, ambiguity and flexibility in what is known as the 'morning circle' in German schools. The morning circle has a longstanding tradition in the German school system and is widely practised. Over the past twenty years, this tradition has been the subject of increasing academic debates, many of which have suffered from one-sided viewpoints that reduce the morning circle to a warm-up phase for the school day or a means of teaching language. What has not been addressed in these debates is the initial notion of the circle as 'the primary feature of new education' (Petersen) - which challenged traditional educational ideas -, or the question as to why the morning circle has become so widespread in German schools today.