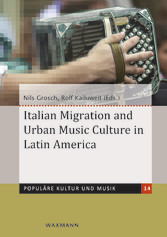 19th century migration from Europe was the other side of the picture from nation building and the rise of nationalism. Between 1870 and 1930, the age of mass migration, about twenty million people left Italy, a quarter of them for South America.
During this era, Italian music and Italian musicians, already present in South America since the mid-16th century, became important and outstanding actors in musical culture all over the subcontinent. They brought along with them their folkloric and popular music and dance repertoires, customs and genres, transforming and developing them in their new habitats.
In the present volume, musicologists and literature scholars from both Europe
and America shed light on different forms of interrelations between Italian migration and urban musical culture in Latin America, from the 16th century through the age of mass migration up until the present day, from Tarantella through Tango to Chilean Pop.