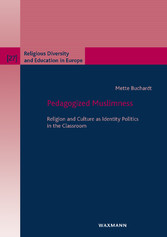 Pedagogized Muslimness - Religion and Culture as Identity Politics in the Classroom

Pedagogized Muslimness - Religion and Culture as Identity Politics in the Classroom

Becoming Danish/Christian and becoming Muslim are skills that may be acquired in the secularized school system. This study explores how social structure and the politics of identity and knowledge in relation to religion intertwine when recontextualized in the classroom of the Danish comprehensive school post 9-11. Through close readings of what takes place at a classroom level in two Copenhagen schools, Pedagogized Muslimness provides insights into how the Nordic model of comprehensive schooling - in the (post-)welfare state - plays out in daily school life and with what effects. The book provides a deeper understanding of how knowledge is produced in school, and how school operates as an arena for the production and distribution of social difference. The good pupil is the pupil that speaks of her/himself, acting as a subject, or who, by confirming the teacher's organizing of her/himself, accepts being made into an object upon which knowledge can be generated. Particularly overexposed are the pupils, whom the teachers identify as 'Muslim', something which draws on decades of casting this group of children as special objects of - as well as obstacles to - schooling. By the late 1970s and the early 1980s, the children of migrants came to be defined by their parents' relation to the labor market: as 'foreign workers' in often unskilled jobs, associated with rural life and 'traditional family patterns', and characterized by what was seen as their (lack of) language skills. In the course of several moral panics around 'Muslims' and 'Muslim children', this focus has translated into a knowledge formation of culture/religion. The book shows how school-produced Muslimness, in the pedagogized social economy of the classroom, becomes a parameter of social class, higher as well as lower.

Mette Buchardt (1969) is Associate Professor at the Department of Learning and Philosophy, Aalborg University, Denmark. Her research centers on the disciplinary field of history and sociology of education and curriculum.